I have an HP Spectre x360 laptop. It’s a model 13-4009na from 2015. Normally it’s wonderful but very occasionally the battery won’t charge when plugged into the charger.

Update 2020-09-20: I’ve had it happen again so I’ve been able to add more information to these instructions.

One symptom is that the mouseover on the battery icon in the Windows system tray shows as “plugged in, not charging” even though the charger is plugged in and regardless of the battery level (2020-09-20: as noted above, this charging status indication may not be present any more):

The other symptom is that the charging light next to the charger socket flashes white once a second:

The usual tricks of unplugging the charger or shutting down Windows don’t work. With the charger unplugged the charger light goes solid white instead of turning off.

Having run a battery diagnostic (repeatedly, including the BIOS version) to rule out a battery problem, I was eventually able to work out a way to fix this and get the battery charging.

NOTE: I take no responsibility for this technique, it’s not been approved by HP. You may also want to run battery diagnostics, as described at the end of this article.

Having said that, nothing in this technique is anything that you might not do occasionally in normal operation when using the device.

Update 2020-09-20: Older versions of these instructions said to unplug the charger. This does not appear to be necessary. Since this problem occurs only rarely, it’s difficult for me to find a minimal set of instructions. The first time I did this, I unplugged the charger to make sure nothing in the laptop was taking power from the charger and retaining state even through the hard power-off. This time, by the time anyone noticed, the battery was down below 10% so I had to try the instructions without unplugging the charger. I’m pleased to say they worked. However, if you have trouble with these instructions, and if you have enough battery for the laptop to start up with the battery unplugged, then try unplugging the charger between steps 1 and 2.

The steps are as follows:

And the light next to the charger socket is the usual orange indicating the battery is charging normally: 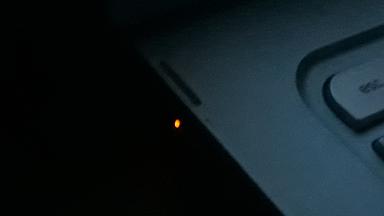 The first time I did this, the problem reappeared after a few days. So, the second time I ran the battery down to a low level (below 20%, I think) before performing the reset. That seemed to fix the problem. At least, it’s now months between recurrences. Update 2020-09-20: As noted earlier, it appears to be some Windows updates that trigger this. That could explain the irregular occurrences.

I’d like to say thank you to the people who have emailed me to say this worked for them. The feedback is appreciated.

If these instructions don’t work, then you may find a battery diagnostic useful and you may want to ensure your machine is up to date with manufacturer’s updates. The tools HP install on their laptops appear to be pretty good.

From Windows, go to the start menu find “HP Help and Support” and “HP Support Assistant”. Select your device, then go to the “Troubleshooting and fixes” tab. In the section “Diagnostics”, select “HP Battery Check”.

It will ask for administrator privileges which you'll need to give it. Then it will run the test. It should report the primary battery as “OK”.

The HP Support Assistant will also allow you to apply manufacturer supplied updates. Look at the tab marked “Updates”. Do not apply BIOS updates until after you’ve sorted out the battery charging problem. A power failure during a BIOS update (because you tripped over the power cable when the battery was flat) is a good way to ruin a machine.

A larger set of hardware diagnostics can be found by, from the start menu, going to “HP Help and Support” and then “HP PC Hardware Diagnostics Windows”. It will ask for administrator privileges which you'll need to give it. The battery test can be found there by selecting “Component Tests”, “Power”, “Battery Check” then pressing “Run Once”. Hopefully, it will give the result “Passed”.

There are also diagnostics built into the BIOS. Enter the BIOS by turning on the machine and pressing F2 (as described in the main part of this article). For the battery diagnostics, using the arrow keys and return, select “Component Tests”, “Battery” and “Run once”. Then to reboot, press escape to get back to the main menu and then select “Exit” and “Yes”.

If the battery tests fail, then you have a fault with your battery and you may need to look at a repair or it may be time to replace your laptop. Either way, you're getting beyond my experience. The BIOS battery tests will offer an option to recalibrate the battery, I’ve no idea if that helps.

Up to the welcome page. Comments should be addressed to webmaster@pertinentdetail.org. Copyright © 2018–2020 Steven Singer.